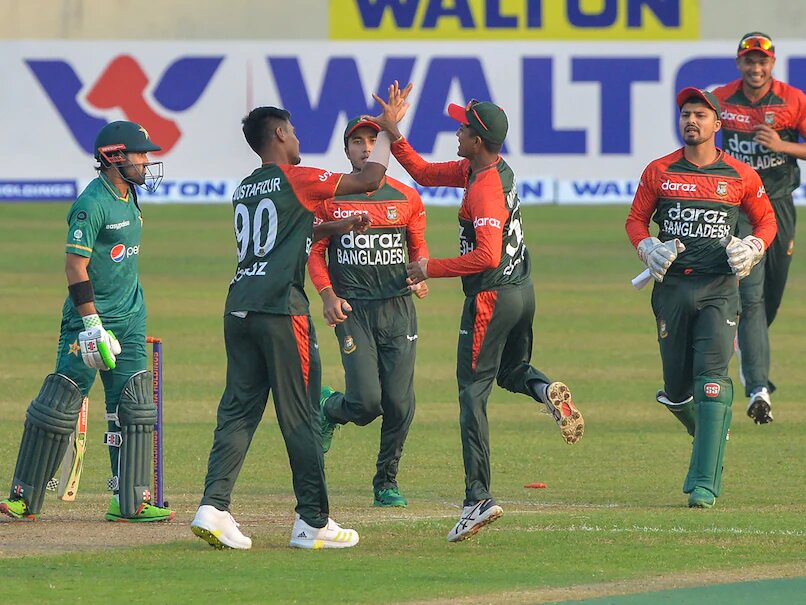 Bangladesh took to the field Friday with a young team to break the circle of defeat. But the last was not saved. BD team was last to Pakistan by four wickets. Bangladesh won the toss and clected to bat first at the Sher-e-Bangla National Cricket Stadium in Mirpur on Friday. With 4 balls left to bat in reply, the visitors reached the port of victory. As a result of this victory, Babar Azam’s team went ahead 1-0 in the three match series. And Bangladesh lost six T-20s in a row.

After the failure at the beginning of the batting, Pakistan turned around. Pakistan lost 4 wickets for 24 runs and dropped out of the match. Such a great start gave the bowlers hope But Fakhar Zaman and Khushdil Shah’s 6-runs partnership returned to the match and Pakistan performed well in the T-20 World Cup. Towards the end 32 balls were needed from 18 balls, 4 wickets in hand. In T20 cricket, it is not a difficult equation, but it is not easy at all for the Mirpur ground. Mustafizur Rahman came in boring at this time, who gave only 3 runs in the first 2 overs.

But if Fitz scored 15 runs in this over, the match would go to Pakistan. 18 runs were needed in the last 2 overs. But in the 19th over, Shariful hit Nawaz’s six off the third and fifth balls and they needed only two runs in the last over. Later, Aminul Islam who came to bowl in his first over, hit a six off the second ball of the revolution to take Pakistan to victory. Shadab khan scored 21 runs and Nawaz remained unbeaten on 16 runs. Taskin Ahmed played the best ball for Bangladesh. He took 2 wickets with 31 runs in 4 overs. Afif Hossain played the highest innings of 36 runs from 34 balls for Bangladesh, and Mehdi Hasan played a stormy innings of 30 runs from 20 balls. Hasan Ali was the best batsman for Pakistan with 22 runs in 4 overs and 3 wickets.

Ever played cricket? Went to the field? Grab the bat-ball? – Sheikh Hasina
Pakistan won the series by defeating Bangladesh by 6 wickets